The Welcome Inn Hotel is delighted to announce that there will be live music in The Failte Suite on a monthly basis from now on with What The Funk to return in the very near future. We are also going to include more bars to make it easier to get a drink and we will be building a full stage and lighting set up for our next date.

Our next date is Saturday 19th of March with a top band , JUNGLE BOOGIE. Jungle Boogie will be rocking out all your favorite tunes from The Kaiser Chiefs to Elvis Presley and everything in between. Doors will be 11.30pm with admission at €10. HALF PRICE ADMISSION BEFORE MIDNIGHT. 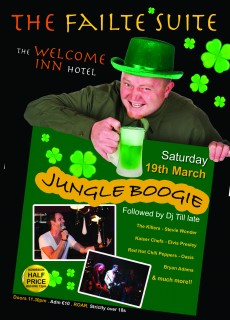 Larry Hogan Producer, composer and guitar player, Larry has played with the likes of Bono and Ronan Keating. He has also recorded and played with ‘The Band’ of Bob Dylan fame and has being involved in platinum selling albums and also works as a music writer for television, co-penning the jingle of TV’s ‘You’re a Star’.

Andrew Mann Andrew is currently working on his solo album ,and can be currently seen singing ‘All Together Now’ for the Centra advertising campaign on Irish TV.

Ronan Johnston Since playing with his early bands Wall to Wall, Boys Will Be Boys, and Roobarb & The Doodlebugs in the 1980’s, Ronan has been a TV presenter, keyboard player, writer of music for TV and theatre, as well as a record producer. His TV presenting career began in the 80′s with Borderline, and since then has appeared with Zig and Zag on ‘The Den’, and most recently as team captain on ‘The Lyrics Board’. Music remains his first love however, and he has played piano, Hammond and accordion with the Black Velvet Band, written the music for ‘Over Ireland’ for PBS in the US, composed over fifty signature tunes and soundtracks for TV, Film and Theatre.

Posted on February 21, 2011 by ClubMantraCastlebar
This entry was posted in Blog. Bookmark the permalink.